Moles have bluish-black to gray fur. They have a slender snout, needle-like teeth, flat feet, claws, and small ears. Moles can grow up to 12 ” long; depending on the species. Moles have pointed noses that distinguish them from meadow voles, gophers, and shrews. Their noses extend well in front of their mouths. Their small eyes and ears are concealed by fur. Their feet are spade-like in shape and are wider than they are long.

Discharged mounded soil and heaved runways are indicators of moles. The Eastern mole is the most common mole found in the eastern US. The most troublesome species on the coast of Oregon and Washington is The Townsend’s mole. The Broad-footed mole can be found in California. Eastern moles can be found from the Atlantic to the foothills of the Rockies, and from Southern Canada to the panhandle of Florida. All moles can be damaging, but the Eastern mole is by far the most widespread. It is better described as the common or grey mole. This mole is the strongest of the group and is most often associated with tunnels and/or mole mounds by residential homeowners. Moles are not rodents but belong to a group of mammals called insectivores. Moles have a very high metabolic rate and have to consume large amounts of food.

Moles mate during the months of February and March. They produce a single litter of three to five pups. Their gestation period is six weeks. Moles do not hibernate or store fat. Severe lawn damage can result until mole control is used or the lawn surfaces freeze in the winter. Newborn female moles will mate the following spring, and the cycle begins again.

Mole activity occurs both during the day and night. They can be seen during damp days, the day after a rain, during the spring, and summer months as they push up their tunnels or mounds. If the lawn freezes in the winter or there is a very dry summer, the moles use deep burrows.

Moles have large appetites and may eat up to 100 percent of their body weight in one day. White grubs, earthworms, beetles, and assorted larvae are their principal foods. Moles feed primarily on insects that feed below the ground. The tunnels that the mole excavates while searching for food may be used only once or maybe traveled repeatedly.

Moles may be active at any time of the day and seem to prefer cool, moist soil (the same as that preferred by grubs and earthworms). Moles do not eat the roots and bulbs of flowers and vegetables. Voles and shrews will attack the roots and bulbs. In fact, moles may benefit these plants by feeding on grubs and worms that can damage them. However, the tunneling activities of moles may disfigure lawns and gardens. 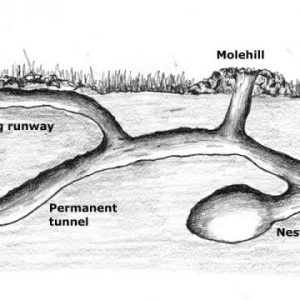 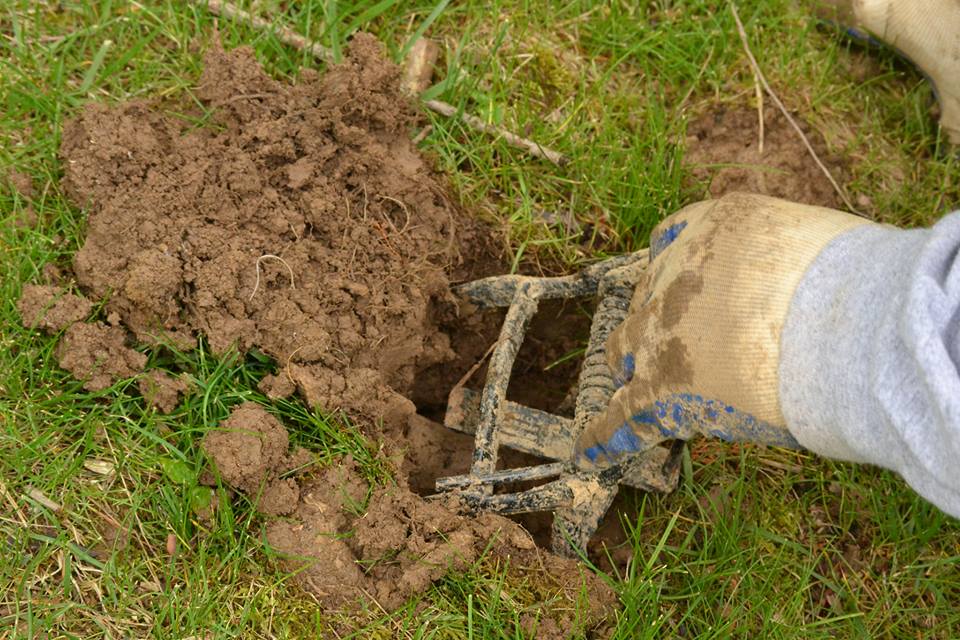 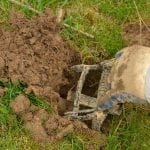 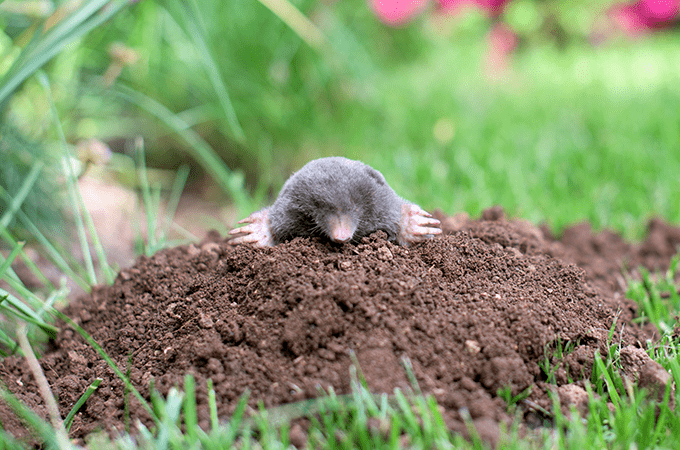 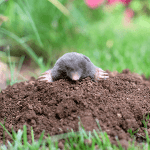 Certain mole tunnels are used as major lanes of travel (main runways) and may be used by several moles in the areas. Sub-surface mole runways are feeding tunnels just below the soil surface and commonly seen as the raised ridges running through lawn areas. The mole is capable of extending these runways at the rate of 100 feet per day. Sub-surface mole runs may be used daily, may be revisited at irregular intervals, or may be used only once and then abandoned.

Moles connect with the deep runways, which are located between 3-12 inches below the surface. As a rule, few or no mole mounds are produced as a result of the production of subsurface tunnels. The deep mole tunnels are usually main runways since they are used daily as the mole travels to and from the main subsurface runways or the nest. The soil excavated from the deep tunnels is deposited on the surface through short vertical tunnels in volcano-like mounds (Mole mounds should not be confused with pocket gopher mounds which are horseshoe shaped.) The number of mole mounds or surface ridges present is no indication of how many moles may be present. On average, one acre of land will support about two or three moles at one time. But areas next to large tracts of forested areas may be subject to continual invasions by moles because such areas may support many moles